‘Not sure I’ll sleep tonight’ ahead of tier announcement

Is your kitchen ready for the Darkside?

Drinks giant Diageo has unveiled a raft of 25 sustainability pledges in its Society 2030: Spirit of Progress​ plan as it looks to contribute towards the achievement of the United Nations Sustainable Development Goals.

The maker of Johnnie Walker, Smirnoff and Guinness will focus its action over the next ten years in three core areas, to align with the United Nations’ plan – promoting positive drinking; championing inclusion and diversity; and pioneering grain-to-glass sustainability.

“As a global business, we are committed to playing our part to protect the future of our planet and to leading the way for others to follow,” Ivan Menezes, chief executive, Diageo said.

“I am immensely proud of Diageo’s sustainability and responsibility achievements to date, and this new, ambitious action plan will challenge us even further to deliver more over the critical decade to 2030.

As part of its plan, Diageo aims to reach more than 1bn people with messages of moderation by 2030, pledging to change the attitudes of 5m towards drink driving educating more than 10m people on the dangers of underage drinking.

What’s more, Diageo has outlined ambitions to have 45% representation of leaders from ethnically diverse backgrounds by 2030 as well as 50% of all leaders being women.

“By setting both gender and ethnicity goals for the business to achieve by 2030, I believe we can truly break down barriers and help shape a more diverse and successful long-term business and society,” Menezes added.

Tennent’s to back hospitality charity with Black Friday profits

Scottish beer maker Tennent’s has pledged to donate all proceeds from online Black Friday sales on 27 November to Scotland’s drinks and hospitality industry charity The Benevolent Society of the Licensed Trade of Scotland – or The Ben.

While Black Friday is typically one of the busiest days for Scotland’s licensed trade and hospitality industry, with tiered restrictions in place across Scotland, it will look very different this year, according to Tennent’s.

“Black Friday is traditionally one of the busiest Fridays in the hospitality calendar, but sadly that won’t be the case this year,” Linzi Gibson, junior brand manager at Tennent’s, explained.

“Tennent’s is a long-time patron of The Benevolent and we know how hard-hit people who have worked in the industry have been with the continued impact from Covid-19. We hope the proceeds from our online store on this day will go some way to providing help for those who need it.”

Chris Gardener, chief executive at The Benevolent, added: “It’s been such a hard year for everyone, but especially for the drinks and hospitality industry.

“We at the Benevolent thank Tennent’s for its continued support, which will bring some cheer to those in the trade who really need it.”

The Government has announced that the National Living Wage will increase in line with inflation by 2.2% from £8.72 to £8.91, a rise of 19p, and be extended to 23- and 24-year olds for the first time in line with recommendations made by the Low Pay Commission.

As reported by The Morning Advertiser’s​ sister title MCA Insight​, workers aged under 23 will benefit from smaller increases in recognition of the risks posed to youth employment by the current economic climate.

Announced in Rishi Sunak’s Spending Review, the Chancellor also acknowledged calls to cancel a slated 5.6% National Living Wage hike amid concerns that it could force companies hampered by Covid-19 out of business.

“Recommending minimum wage rates in the midst of an economic crisis coupled with a pandemic is a formidable task,” Bryan Sanderson, chair of the Low Pay Commission, said. “The difficulty in looking forward even to next April is daunting.

“There are strong arguments concerning both low-paid workers – many performing critically important tasks – and the very real solvency risks to which small businesses are currently exposed. In these unprecedented conditions, stability and competence are prime requirements.

“Our value as a social partnership is to use the imperfect economic evidence to produce a recommendation which is professionally researched and dispassionate.

“Most importantly, after much debate it has the support of the business, trade union and academic representatives who make up the Commission. We have opted for a prudent increase which consolidates the considerable progress of recent years and provides a base from which we can move towards the Government’s target over the next few years.”

The National Living Wage and National Minimum Wage rates will come into force from April 2021.

Van Karnebeek, who will leave the business on 1 March 2021, will be replaced by Thompson, who is currently head of categories, brand, innovation and stores at Avon and previously spent 24 years at Diageo.

“At Avon, James was part of the leadership team charged with driving its purpose, commercial, marketing, digital and cultural transformation, including its new campaign ‘Watch Me Now’ and leading global and local collaboration across more than 50 markets,” a statement from Heineken explained.

Budweiser Brewing Group UK&I has relaunched its gift card scheme Save Pub Life to help communities support their local this Christmas by enabling pubgoers to buy a gift card for a friend or loved one to redeem at their favourite local pub.

Budweiser Brewing Group has also pledged to send the initial purchaser a gift card of equal value to encourage people to come together when pubs reopen and share a beer.

When the on-trade was initially forced to shut in March, Budweiser Brewing Group launched its first edition of Save Pub Life offering customers the chance to buy gift cards to spend at participating venues when they reopened in July, with the beer maker matching the value of the gift cards and funnelled the money to all participating businesses.

“It’s undoubtedly been a tough year for everyone and the latest round of pub closures has added to the difficulties our hospitality sector faces,” Paula Lindenberg, president of Budweiser Brewing Group said.

“Now we find ourselves in a second lockdown, we want to encourage people to again support their local pubs, which are vital to our communities.

“Our mission at Budweiser Brewing Group is to ‘bring people together for a better world.’ What better way to tell your loved ones that you miss them, than with a gift card to meet them and share a beer as soon as we are able?”

Liverpool-based pub operator Rosewell Estates has secured £2.5m funding from Barclays to protect more than 200 jobs across its estate of 24 wet-led pubs.

Rosewell Estates’ turnover is just over £9m with 225 members of full and part-time staff employed across its portfolio.

“In 2019, we entered into discussions with various corporate banks as we looked to secure a refinance and restructuring package with a suitable long-term partner,” Caine told Business Live​.

“Barclays were successful after impressing us with their sector knowledge, expertise and wide range of services they were able to offer to assist and complement the business.

“After a successful application process, matters began to progress with a provisional completion target date of March 2020. Unfortunately, the pandemic then struck, throwing both the deal and the hospitality industry into a tailspin of uncertainty. Over the following months, we worked closely with Rob Morland and his team, overcoming the many challenges that the pandemic has thrown at both our business and the industry as a whole.

“Rob never wavered in his support to the business and his adaptability and tenacity enabled us to achieve our ultimate goals. We cannot thank Rob Morland and his team enough for their relentless efforts and support throughout these unprecedented times. We now look forward to working together with Barclays as we come through the pandemic and look forward to growing the business with them.”

On 22 November, Leeds-based brewer Northern Monk brewery listed 5,000 free cans of flagship brew Faith on its online shop for NHS employees, front line care workers and educators across the UK after a similar gesture in March.

“In the midst of the second national lockdown, and in the run up to the festive period, there’s never been a more important time for us to show our support for the incredible work that NHS staff, front line care workers, teachers, lecturers, support workers and more, are doing during this time,” Northern Monk founder Russell Bisset explained.

“At the height of the Covid-19 pandemic, we gave more money to charity than we made as a business – and we don’t intend to stop giving yet.”

Spanish beer brand Estrella Galicia has announced it plans to build on the £75,000 it has invested in producing and supplying equipment designed to help pubs and bars reopen amid the ongoing pandemic with continued support for the sector.

A total of 125 restaurants and pubs have been supplied with PPE such as face masks, personal and foot-operated hand sanitisers and contact-free styluses by Estrella Galicia to ensure a safe environment for both customers and over 2,500 staff.

What’s more, larger establishments with outdoor areas have been offered parasols and barriers to facilitate trade among larger groups when permitted.

Rachel Masterson, manager at Salthouse in Cullercoats, Northumberland, said: “The back-to-work kits have provided such confidence to both our staff and customers, enabling them to enjoy our restaurant during Covid times.

“The individual sanitisers, which come complete with hooks to attach to uniforms are also so handy, meaning staff can always ensure they have clean hands wherever they are in work.

“We’ve also received positive feedback from customers that the visibility of such PPE makes them more confident when dining out in our restaurant, which is critical at a time such as this.” 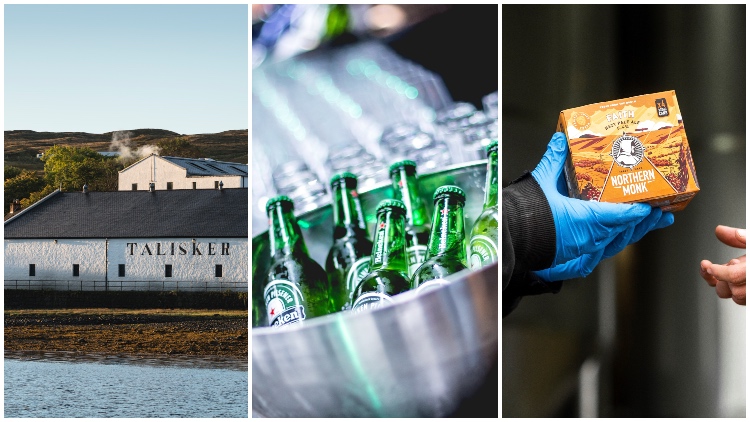