All pubs except in Isles of Scilly to shut

I teamed up with a group of friends who met on the craft beer scene having worked in the UK’s best breweries.

I gave my job up in October 2019 and by Christmas we had secured the brewery space. In February the pandemic hit and we made the decision to contract brew to get our name out there, instead of waiting for the bricks and mortar brewery to open.

Thank god we did, there was no furlough support for new businesses and no end in sight.

We wanted to make modern interpretations of classic beer styles, as well as experimenting with the new.

The classics like Sierra Nevada Pale Ale, Fullers ESB and Augustiner Helles are real touch points for all of us within the beer community – they don’t get old, and they always taste amazing.

We set ourselves the task of making our own interpretations of these styles: the US Pale Ale, an ESB and a Helles, and making them truly our own.

It’s either pretty damn brave, or very foolhardy to try and do something like this in an international crisis – but it really was now or never – and incredibly, the response and feedback has been phenomenal both from the local community of Farsley in Leeds and the beer community online.

This has been a brilliant opportunity to show our resilience and share some good news in spite of the pandemic.

Two days after launching our beers online, we had sold out two thirds. People chose to support us, without even having tried the beer yet.

We continued to contract brew throughout the summer and steadily built on the positivity.

Contract brewing is hard. There was so much out of our control with the scheduling and ingredient sourcing. We had built an incredible knowledgeable team but so much was out of our hands. This was a very stressful time.

A huge turning point for us was being invited by BrewDog to collaborate on a beer for CollabFest – something they later had to take online because of lockdown 2.0. It helped us with cashflow, credibility and it opened new doors, we’re really thankful of that.

Fast forward to December and our brewery and 60 capacity taproom is now open, we’re in tier three so it’s takeout only.

We’ve not yet served a pint of beer. We’ve been open for ​three weeks and are starting to brew, and then we need to make sure we can supply the thirsty local community with enough beer.

Our whole ethos is about working collaboratively within our community, in fact the name Amity is Celtic and stands for friendship and community – not JUST the town in Jaws.

We have been blown over by the support of the community, whether that’s locally or figuratively within the beer industry, it has kept us going in some very dark days and we’re all looking forward to the day when we can host them properly in our site. 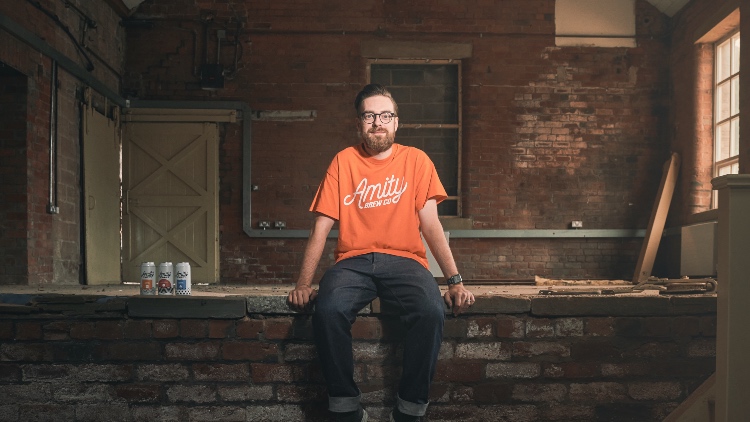