Either ‘pretty damn brave, or very foolhardy’ to launch a brewery during an international crisis

Between October and December 2019, we converted the old Nortons Hydraulics factory into a three-bar live music venue, with a traditional tiled bar, a snug room and a 600-capacity live music space.

While we opened the doors to Nortons on Friday 13 December, we had a gloriously chaotic test run on 10 December where we traded for nearly two hours with no tills, toilet roll holders or tables. The carpenters were still working away and we had no glasses on shelves. We still had a scissor lift in our live music space and had to buy an emergency glass washer on the day while the one I’d ordered was still on the way.

On 31 January we launched our live music venue, a warehouse space we’d named “The Back Room”. We held a massive party with some huge local Irish, folk and rock bands and filled the pub.

March was the busiest we’d been. Hundreds of customers filled the pub for a rowdy Six Nations, followed by some of the biggest local bands we could afford. All free entry and tremendous craic. We had a reputation for being the new party-bar.

Little did we know that our St Patrick’s weekend would be the last before lockdown.

We saw 1,700 people come through the doors for our sell out St Patrick’s Day. We had booked every band we could think of. The place was wilk. We knew St Patrick’s would be our pay off and were planning on two weekends of bumper trade.

We were buzzing for the following weekend but within five days the place was empty.

After the “do stay out but don’t go to the pub” debacle, Johnson finally announced that all pubs were to close immediately.

We’d hit our six-month targets in less than three months, were the biggest live music pub in Digbeth and had absolutely smashed it. Then on 20 March we closed with no idea when we’d open again.

I had to spend a good month or so away from the place to clear my head. We’d heard rumours that pubs would be able to open as outdoors only so invested in two shipping containers, a load of trestle tables and benches and furniture to turn our car park into a massive beer garden.

We finally opened in July, with our capacity down from 600 to 100 and no live music until August. Live music is our passion, but when it finally returned, customers had to be seated, silent and sensible.

In September the 10pm curfew was introduced. This was a crushing hit to our turnover. More than 70% of our week’s trade happens after 8pm on a Saturday. For weeks this change decimated our takings and broke my heart when we had to eject well behaved customers into the street where they would have to wait over an hour for a taxi, to avoid being fined myself.

Despite being a city centre bar, we have most of our customers travel in from suburbs. I was gravely concerned that customers would eventually tire of Uber-Surcharges and expensive taxis as the city struggled to get everyone home at the same time.

I remember thinking how senseless the 10pm curfew was, and how it flew in the face of our actual licensing objectives – public safety; the prevention of public nuisance and the prevention of crime and disorder.

Then, October and the new ‘rule of six’, an even bigger hit. No more than one household per table inside – how on earth would we govern this? We had our 15 minutes of fame with Greg James on Radio 1 with our ingenious “what colour’s your kettle?” method of determining whether groups of six were from the same household or not.

Turnover was going to tank, so I quickly invested in a huge outdoor canopy, heaters, festoon lights, barrels, and even more tables. With the help of some family friends who spent a Saturday morning cutting the front out of a shipping container, we turned it into an outdoor stage. Despite social distancing, curfew and the ‘rule of six’, we were determined to still be the party bar.

This success has lasted for a few weeks: head chef Andy was throwing out some fantastic pizzas (black pudding and goats’ cheese anyone?), we were still promoting live music, and we’d worked out a winning formula to keep customers happy, entertained, and above all safe.

A venue that according to the business plan would hold 800 people across the site, was now reduced to 200. A venue that took 12 months to get a 4am licence, was now closing before the corner shop down the road.

Our turnover being hit by every new restriction only forced us to be more inventive.

Our priority will always be public safety, and if we need to stay closed then so be it. Wherever the Government’s priorities are, they certainly aren’t with hospitality. 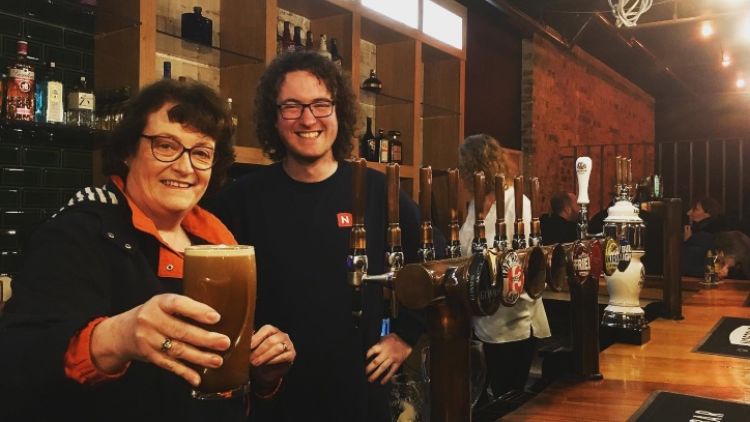